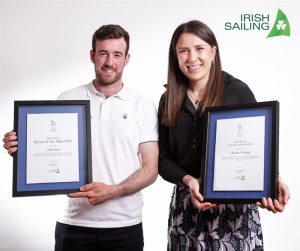 Annalise Murphy, Olympic silver medallist, was honoured at the Irish Sailing Awards today with the presentation of the President’s Award to mark the end of her stellar Olympic sailing career.

Presenting the prize, Patrick Coveney, Greencore CEO and outgoing chair of the Irish Sailing Olympic Steering Group commented: “Annalise is perhaps the greatest Irish sailor of all time and has changed the way sailing is seen in this country”.

James O’Callaghan, Irish Sailing Performance Director commented: “Finn’s progression since his Olympic qualifying disappointment has been phenomenal. He’s responded like a true champion winning a World Championship silver medal. The recognition from the Irish sailing community and his status as Irish Sailing Sailor of the year is truly deserved”.