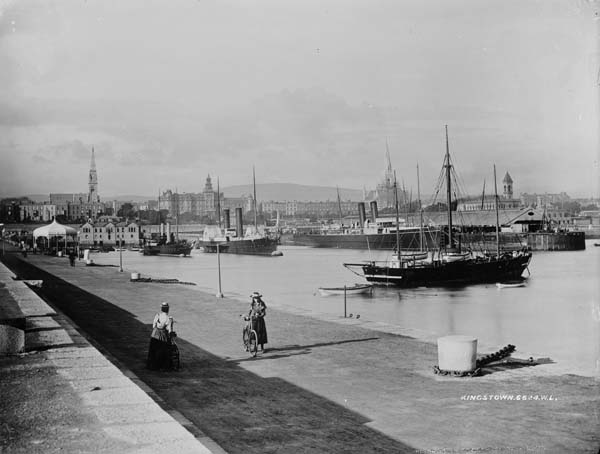 Although there are references to an active “club” prior to 1870, history records that the present clubhouse was erected in 1870 at a cost of £4,000 to a design by William Sterling and the Kingstown Royal Harbour Boat Club was registered with Lloyds in the same year. By 1872 the name had been changed to the Kingston Harbour Boat Club and this change was registered at Lloyds. In 1881 the premises were purchased by a Captain Peacocke and others who formed a proprietary club called the Kingstown Harbour Yacht Club again registered at Lloyds. Some six years later in 1877 the building again changed hands being bought by a Mr Charles Barrington. and between 1877 and 1901 the club was very active and operated for a while as the “Absolute Club” although this change of name was never registered. In 1901 the lease was purchased by three trustees who registered it as the Edward Yacht Club. In 1930 at a time when the Edward Yacht Club was relatively inactive, a committee including The Earl of Granard approached the trustees with a proposition to form the National Yacht Club. The Earl of Granard had been Commodore of the North Shannon Y.C. and was a senator in the W.T.Cosgrave government. An agreement was reached, the National Yacht Club was registered at Lloyds. The club burgee burgee was created, red cross of Saint George with blue and white quarters being sky cloud, sea and surf. The Earl of Granard became the first Commodore. In July of 1950 a warrant was issued to the National Yacht Club by the Government under the Merchant Shipping Act authorising members to hoist a club ensign in lieu of the National Flag. The new ensign to include a representation of the harp. This privilege is unique and specific to members of the National Yacht Club. Sterling’s design for the exterior of the club was a hybrid French Chateau and eighteenth century Garden Pavilion and today as a Class A restricted building it continues to provide elegant dining and bar facilities. An early drawing of the building shows viewing balconies on the roof and the waterfront façade. Subsequent additions of platforms and a new slip to the seaward side and most recently the construction of new changing rooms, offices and boathouse provide state of the art facilities, capable of coping with major international and world championship events. The club provides a wide range of sailing facilities, from Junior training to family cruising, dinghy sailing to offshore racing and caters for most major classes of dinghies, one design keelboats, sports boats and cruiser racers. It provides training facilities within the ISA Youth Sailing Scheme and National Power Boat Schemes. The club is particularly active in dinghy and keelboat one design racing and has hosted two World Championships in recent years including the Flying Fifteen Worlds in 2003 and the SB3 Worlds in 2008. The ISAF Youth Worlds will be co-hosted with our neighbouring club the Royal St. George Yacht Club in 2012.