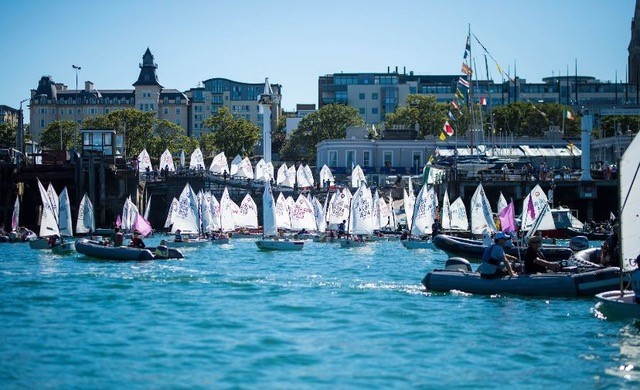 IODAI Optimist Nationals and Open took place from August 11-14th in the Royal St. George Yacht Club, Dun Laoghaire. Although the weather was perfect for visiting families and on-shore volunteers with sunny skies and high temperatures, there were challenging conditions on the water with little or no wind and lots of tide, resulting in very long days for sailors and support coaches and volunteers.

34 Sailors from Team GB travelled with their families and along with all participants and guests enjoyed super Irish hospitality from our hosts at RStGYC, led by Brendan Foley and and a team of 120 volunteers including IODAI committee members.

In total 25 Optimist Sailors participated from the National Yacht Club, 8 in Senior Main Fleet, 4 in Junior Main Fleet, 6 in Regatta Racing Fleet and 7 in Regatta Coaching – a new fleet added this year, and mirroring other international competitions.

The 6 sailors in Regatta Racing Fleet sailed 10 races (with 2 discards). Among 36 sailors in this fleet, Aurèle Dion won to become National Champion in the Regatta Fleet. Well done to all the brave sailors in this team which included Amélia Chapman, Félicia de Vreeze, Jacob Browne (awarded for cleanest and best environment friendly sailor), Michael Hanley (best questions to coaches) and Louis Trickett.

Upgrades following the event and Provisional National Rankings have been published on IODAI website, and the final IODAI competition of 2022, the Ulsters is now schedule to take place at HYC on September 10 & 11th.