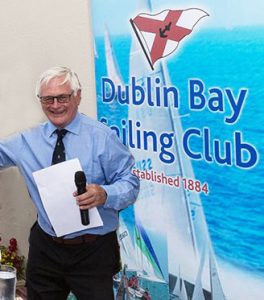 On behalf of my fellow Flag Officers and the DBSC Committee, I would like to express my sincere thanks to Chris Moore who retired as DBSC Honorary Secretary of DBSC on Thursday June 30th.

Chris has given tirelessly to DBSC, and sailing in general, for all of these years and we thank him for all his time, effort and guidance throughout. Prior to joining the DBSC committee as Rear Commodore in 2009, Chris had served as Commodore of Bray Sailing Club and Commodore of the National Yacht Club. I have worked closely with Chris since I joined the DBSC committee in December 2012 when Chris was elected as Vice Commodore. Chris’ wealth of knowledge and experience has been invaluable to us at DBSC.

Chris always manages to achieve a good balance between embracing progress and innovation while not losing sight of the traditions of Dublin Bay Sailing Club which are an important part of our 138-year history. It was during Chris’ tenure as Commodore that the Green Fleet was introduced, and it now forms a key part of our Saturday Racing Programme.

In addition to steering the DBSC ship during his time as Commodore, Chris could be seen working in the bilges of MacLir and Freebird, as well doing demanding physical work on the Marks and the Hut. We hope to see Chris continue to be involved in these elements of DBSC after he hands over the administration duties of Hon. Secretary to Rosemary Roy.

We are extremely fortunate that Rosemary has agreed to take on the role of Honorary Secretary of DBSC having joined the committee at our AGM in December 2021. Rosemary has been a key member of the DBSC Race Management Team for many years and is the regular Timer on our Red Fleet on Thursdays. As well as her Race Management duties with DBSC, Rosemary is in much demand for events outside Dublin and is part of Cork Week’s Race Management crew this season. Rosemary and Jack Roy were named Afloat Sailors of the Month in March 2020 for their combined contribution to sailing in Ireland and abroad. We know that Rosemary will do a great job as Honorary Secretary and we look forward to working with her in that role.

We wish Chris the best of luck with his future involvement with DBSC, hopefully with a less onerous workload.