With his team of Adam Hyland and Robbie English, Hassett beat an impressive field of national champions and Olympic sailors to come out victorious.

After a postponement on Day 1 due to unfavourable conditions, the fleet of seven teams finally got out in the NYC’s fleet of purpose-built Elliott 6M match-racing boats. After multiple attempts and gusts upwards of 35 knots, it was decided to cancel racing for the day and have an early start the next day instead.

As Sunday rolled around, teams pitched up at 8am to a fantastic sunrise and ideal match racing conditions. Race officer Will Byrne cracked off 21 races to complete the round robin in impressive time. The top four teams — Mark Hassett, Brendan Lyden, Tom Fitzpatrick and Seafra Guilfoyle — proceeded to finals.

As top ranked team after the round robin, Hassett opted to face Guilfoyle in the first semi, leaving Lyden to go up against Fitzpatrick in the other side of the first to two wins in the semi-finals. Hassett had two clean wins against Guilfoyle to proceed to the finals. 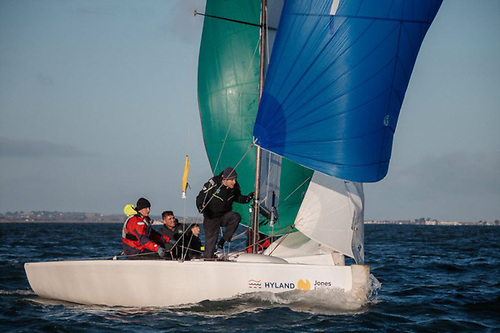 Lyden vs Fitzpatrick was not so simple. Fitzpatrick took the first win with Lyden taking the second. Going in to the final race, it was neck-and-neck at the top mark, but a MOB on Fitzpatrick’s boat all but scuppered their chances of making the finals, allowing Lyden to sail to victory.

Then the finals were upon us: Hassett vs Lyden, who were also the top two teams after the round robin.

Hassett got the first Starboard entry start as top seeded sailor and the two locked horns for two very intense final races. Hassett won race one and looked to be trailing in the second but a smart tactical move, gybe setting at the top mark while Lyden sailed in to the lee of the west pier allowed them to regain the lead and sail to a 2-0 victory, winning the event overall.

Diana Kissane and her team of Ellen Cahill and Cliodhna Connolly also came away as top female team of the event.

Organisers offered “massive thanks” to Jones Engineering and Hyland Shipping for backing the event. “Without the generous support of the sponsors, this event could not have been the success it was,” they added.